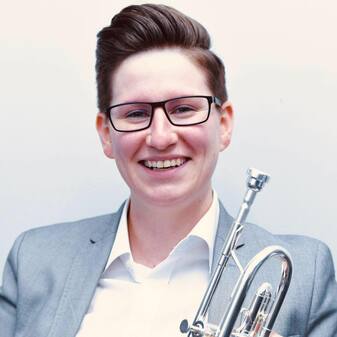 Dr. Marisa Youngs is an avid performer, educator, and composer bringing a fresh artistic vision to the world of brass performance. Marisa has performed throughout the United States, Europe, and Australia as a soloist, chamber musician, and conductor, as well as with orchestras, wind bands, and jazz bands. Performing and teaching in a multitude of styles, Marisa’s artistic talents have flourished on the concert stage as well as in the classroom.
​
As a trumpet artist, Marisa has performed with a wide variety of ensembles and as a featured soloist with several orchestras and wind bands. She has worked with renowned conductors, including Marin Alsop, Leonard Slatkin, and H. Robert Reynolds, and has appeared in historic venues such as Boston’s Symphony Hall, Pittsburgh’s Heinz Hall, Tanglewood’s Ozawa Hall, The Metropolitan Museum of Art, and St. Patrick’s Cathedral in Dublin, Ireland. Marisa’s recent performance highlights include principal trumpet with opera star Andrea Bocelli, sharing the stage with banjo phenom Béla Fleck, and performing principal trumpet on J.S. Bach’s Magnificat with members of the Charlotte Symphony.

Marisa is currently the Adjunct Professor of Trumpet and Music Theory at Winthrop University in Rock Hill, South Carolina. At Winthrop, she teaches Applied Trumpet and Trumpet Repertory Class, directs the Trumpet Ensemble, and teaches several music theory and aural skills courses. She recently received the 2021 Adjunct Professor Excellence in Teaching Award from Winthrop’s College of Visual and Performing Arts Dean’s Council. Graduates of the Winthrop Trumpet Studio have gone on to teach in the public and private schools, pursue advanced degrees in teaching and performance, and lead successful careers throughout the music industry. Her university and high school students have won numerous awards, including concerto competitions, International Trumpet Guild scholarships, National Trumpet Competition Semi-Finals, university scholarships, and Region/All-State chairs.

Marisa received her Doctor of Musical Arts degree in trumpet performance from the University of Kentucky, where she was a Teaching Assistant for both the trumpet studio and the music theory department. In addition, she was the first student to complete UK’s Graduate Certificate in Baroque Trumpet Performance. She was also awarded two competitive academic fellowships from the UK Graduate School and partnered with the UK Linguistics Department to conduct interdepartmental dissertation research on the effects of linguistics in trumpet performance. Before attending UK, Marisa earned a Master of Music in Trumpet Performance from Boston University and a Bachelor of Science in Music Education from Indiana University of Pennsylvania. Her primary teachers include Jason Dovel, Terry Everson, Thomas Siders, Kevin Eisensmith, and Robert Dolwick.

Marisa also composes and arranges works for unaccompanied trumpet, trumpet and piano, brass quintet, and trumpet ensemble. Her most recent composition, Eclipse (for solo flugelhorn/trumpet), received its first live performance by Brynn Marchiando, principal trumpet of the Santa Fe Symphony. Eclipse was featured as the closing work for the symphony’s virtual season opener in October 2020, which was filmed as an interactive concert series at Ghost Ranch in New Mexico. The piece was originally commissioned by Jason Dovel for his most recent CD, New Unaccompanied Music for Trumpet and Flugelhorn. Marisa also has several original compositions for trumpet ensemble and enjoys arranging in a variety of styles for trumpet and piano, brass quintet, and trumpet ensemble.
​
In other professional activities, Marisa currently serves as the New Works Coordinator for the International Trumpet Guild (ITG) and has had several articles published in the ITG Journal. She has given a linguistics presentation at the virtual 2021 ITG Conference, led a masterclass at the 2019 ITG Conference in Miami, Florida, and was featured as a New Works performer at the 2018 conference in San Antonio, Texas. She has also presented her linguistics research at the University of Kentucky Summer Trumpet Institute and remains on faculty there every summer. Marisa is always looking for new and exciting opportunities to expand the role of the trumpet and enrich both local and international communities through music performance and education.