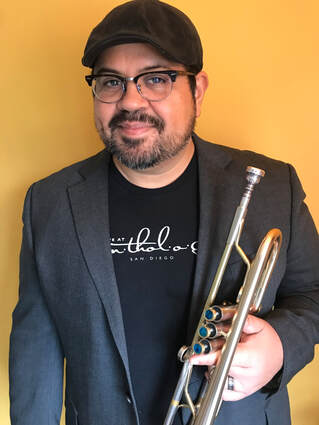 Tito Carrillo is a trumpeter, composer, and educator, whose
music blurs the lines between Afro-Caribbean music traditions
and modern jazz. Born and raised in Austin, TX by a Puerto
Rican father and Mexican-American mother, Carrillo came to
prominence in the mid 90’s in Chicago’s rich jazz and Latin
music scenes, becoming a top call soloist, sideman, and
bandleader. The Chicago Tribune describes him as having
“acquired a reputation as a fluid improviser, doubly-blessed
with a warm lyric style and technique to burn.”

He released his debut solo album in 2011 entitled Opening Statement (Origin Records) to rave reviews, and his next solo project Urbanessence (Origin Records) will be released in October of 2022, and will feature Troy Roberts on saxophone, Ben Lewis on piano, Clark Sommers on bass, Jay Sawyer on drums, and Victor Gonzalez on Latin percussion.

Tito Carrillo is a passionate and dedicated jazz educator, and he has served on the faculties of Roosevelt University, Northwestern University, and his current post, the University of Illinois at Urbana- Champaign, where he has served as full-time professor of jazz trumpet since 2006. He has taught at secondary and collegiate music programs across the U.S. and Latin America, and his long list of former students include many who have established careers as both performers and educators, and have won international jazz competitions at the highest level.  In July of 2022, Carrillo launched JAZZMIND, his YouTube channel dedicated to teaching jazz improvisation, trumpet performance, and mindfulness for musicians.