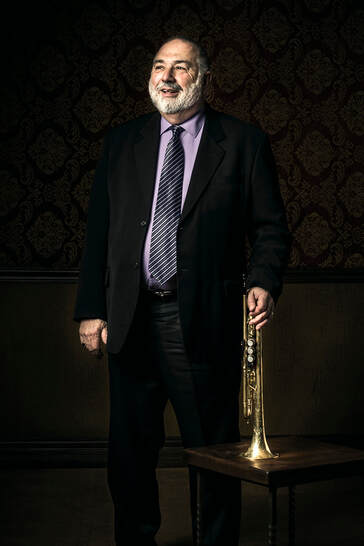 Vince DiMartino is one of the most sought after trumpet performers and educators. Since graduating from The Eastman School of Music in 1972, professor DiMartino taught at the University of Kentucky until 1993. At that time, Mr. DiMartino began a new appointment as Distinguished Artist in residence at Centre College in Danville, Kentucky. There he teaches trumpet, jazz history, and coaches brass and jazz ensembles. He has served as the Music Chair and is currently coordinator of the Centre College Instrumental Program. He is a distinguished Matton Professor of Music at Centre College.

Vince DiMartino is equally known as a jazz artist. He has been the lead and solo trumpet in the Lionel Hampton Band, the Chuck Mangione Band, the Clark Terry Band and The Eastman Arranger’s Holiday Orchestra. He has also performed with some of this country’s finest college jazz ensembles. Vince has been a member of the artist-faculty of the highly acclaimed Skidmore Jazz Institute since its inception in 1988, working with fellow artist-teachers Milt Hinton, Todd Coolman, Ed Shaughnessy, Frank Mantooth, Curtis Fuller, Dick Oatts and Pat LaBarbera.

Mr. DiMartino has been soloist with many symphony orchestra including Cincinnati, Buffalo, Sante Fe, North Carolina, Orlando, Baton Rouge and Rochester, New York. He also appeared as guest soloist with the Boston Pops on their Summer Tour in 1999 and for a national television broadcast of the same. He has also been a soloist with the Army Blues Jazz Band, The Army Brass Band, The U.S. Air Force Band of Flight, and The United States Marine Band. Mr. DiMartino is the first civilian to perform with this ensemble. He is also co-founder of the New Columbian Brass Band, a turn-of-the-century town band, with Dr. George Foreman, Director of the Norton Center for the Arts at Centre College. The band has recorded three CDs for Dorian Records.

With Dr. Schuyler Robinson, Mr. DiMartino made a recording for Mark Records with the DiMartino-Robinson trumpet and organ duo entitled Orchestral Favorites for Trumpet and Organ. ITG has designated this CD as its membership gift CD. The duo was awarded a National Endowment for the Arts Fellowship. In the summer of 1994, he performed at Lincoln Center with The Canadian Brass, The New York Philharmonic Brass and The New York Brass. He also was a featured artist-teacher at the Kiev International Trumpet Competition in 1998.
Vince and UK Jazz band director Miles Osland co-direct The DiMartino-Osland Jazz Orchestra and have recorded two CDs under that name on Seabreeze records, Quotient and Off the Charts.

Throughout his teaching career, Professor DiMartino has been a member of the artist faculty of many international seminars and courses. These include The Empire Brass Quintet-Tanglewood summer program, The Spanish Brass Festival in Alzira-Spain, The Kalavrita Brass Course in Greece, as well as seminars in England, Ukraine, Thailand, Germany and Canada.
DiMartino is 2004 CASE Professor of The Year for the state of Kentucky. This award is given nationally each year to one person in each state in The United States. He is the recipient of The Governor’s Lifetime Achievement Award for 2008-2009 for the state of Kentucky.
​
Vince DiMartino is an S.E. Shires Trumpet Artist and plays Pickett Brass Mouthpieces.
​